Still from Will Your Heart Pass the Test?, NFT by Drue Kataoka Studios × ILMxLAB benefitting the King Center & #StopAAPIHate

Will Your Heart Pass the Test?

100% of the Proceeds will benefit the Martin Luther King, Jr. Center for Nonviolent Social Change & #StopAAPIHate

By signing up, you agree to receive email communications from Phillips

About Will Your Heart Pass the Test?

Trailer for Will Your Heart Pass the Test?, NFT by Drue Kataoka Studios × ILMxLAB benefitting the King Center & #StopAAPIHate

‘Will Your Heart Pass the Test?’ was created in response to the growing number of racist and sexist imagery within the NFT ecosystem. The piece serves as a reminder that while the internet, social media, and mobile technologies have served as a democratizing force in communications and content creation, there have been missed opportunities to confront an exhausted, suffering world plagued by the social ills of racism and sexism. The full NFT will be debuting on November 4th at Dreamverse in New York, the World’s first NFT Art and Music Festival.

Kataoka’s work was inspired in part by a 3,500-year-old myth from the Ancient Egyptian text ‘The Book of the Dead’. According to it, the ‘Weighing of the Heart’ ceremony determines whether a person’s soul is fit to move on to the afterlife, and involves weighing one’s heart against a feather on a scale. Kataoka’s NFT depicts the rite as a call for introspection among the humans of today: technologists, politicians, business leaders, influencers, opinion-makers, and everybody who cares. “At the end of our lives, how will we be judged? The problems we face are of our own making. But time is slipping away with every beat of our hearts, and turning the tide becomes increasingly harder. Instead, are we hiding our individual responsibility behind the collective “we” and finger-pointing, while sexism and racism comfortably colonize the next wave of revolutionary technologies?” elaborated Kataoka.

Created in collaboration with ILMxLAB, Lucasfilm’s legendary immersive entertainment studio, the resulting NFT is an impressive, complex technological feat with each frame taking 20 minutes to render, resulting in a total of 23 days to render the full NFT.

Drue Kataoka is an artist-technologist-activist & CEO of Drue Kataoka Art Studios, the leading global art studio in Silicon Valley serving top collectors in 5 continents & over 30 countries. Influenced by Zen philosophy, technological innovation and scientific breakthrough, Drue’s body of work across genres and media reflects her vision of the artwork as a living entity redefined in each interaction with a viewer. Her time dilation piece UP! was featured in the first zero-gravity art exhibit at the International Space Station. Named a Cultural Leader of the World Economic Forum & a Young Global Leader. A graduate of Stanford University, Drue was named a Cultural Leader of the World Economic Forum and recognized by the Martin Luther King, Jr. Research & Education Institute with their award for lifetime commitment to social justice. She was the first visual artist and first Asian American woman to be named a Clubhouse “icon”. So far in 2021, Drue has raised over $500,000 for social causes ranging from the King Center, #StopAsianHate and India COVID relief. 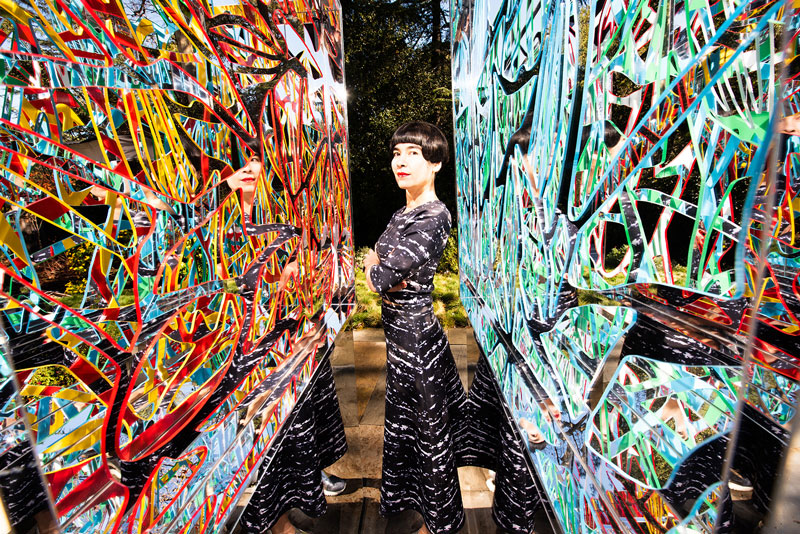