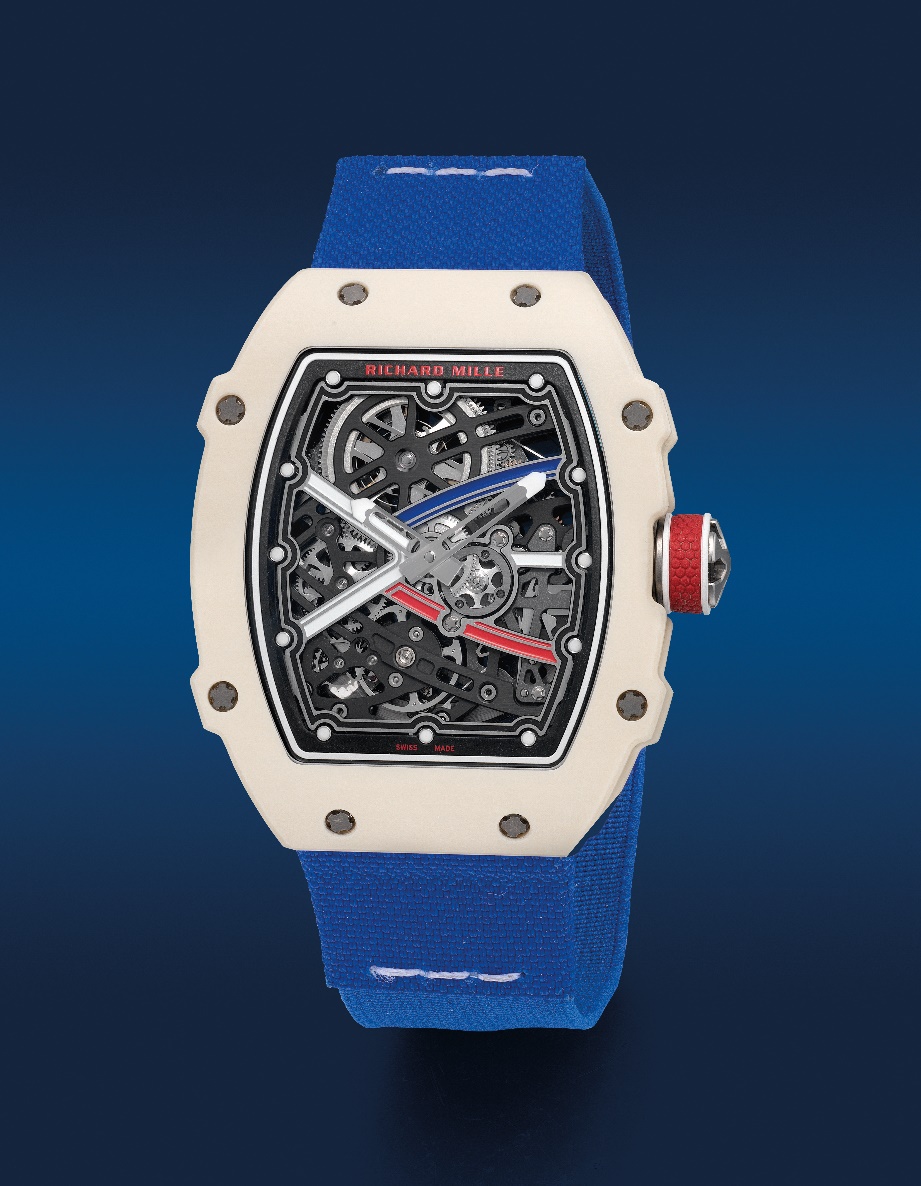 Hong Kong- 5 May 2022 - Phillips in Association with Bacs & Russo is pleased to reveal additional highlights and present the full catalogue for The Hong Kong Watch Auction: XIV, which will take place on 27 and 28 May at the JW Marriott in Hong Kong. Besides important timepieces from powerhouses such as Patek Philippe, Rolex and A. Lange & Söhne, the sale will also highlight a selection of carefully curated timepieces from some of the most creative and talented independent watchmakers who have in their own manner redefined watchmaking.

Thomas Perazzi, Head of Watches, Asia, Phillips, said: “The watches offered this season are as distinctive as the watchmakers who made them. We have watches from legends such as François-Paul Journe and his pioneering Resonance and Octa Calendrier, as well as a stunning and one-of-a-kind timepiece with a dial that is a work of art in its own by Kari Voutilainen. At the same time, we are presenting a unique stainless steel prototype with an innovative movement almost entirely made out of titanium created by German watchmaker Lang & Heyne, made in collaboration with Phillips in Association with Bacs & Russo and The Lavish Attic. One of the largest independent watchmaking selections being offered in recent years in our Hong Kong auction, the sale encompasses ultimately different watches for different tastes, but each piece offered is a watch perfectly embodying the unbridled philosophy of its maker.”

Ever since the release of his first model in 2001 Richard Mille has been known for visionary and avant-garde designs with an aesthetic never seen before in the history of watchmaking. The present RM 67-02 is in perfect tune with Mille’s philosophy pushed to the limits as this ultra light piece weighs a jaw dropping mere 32 grams (including the strap) thanks to the combination of TPT composite materials and grade 5 titanium of the case. It was developed with Alexis Pinturault the French ski champion, who is the most successful French skier in World Cup history with 34 World Cup victories.

With an ever engaging relationship with Formula 1, Richard Mille has offered numerous models in collaboration with professional athletes over the years, with one of the most recognised being the Felipe Masa series of RM011.

The present example RM011 belongs to one of the earliest limited edition models made under the RM011 umbrella, it is also one of the very first examples to feature a DLC-coated titanium case giving an all-black appeal contrasted with white, red and yellow accents, colours that pays its tribute to the racetrack was made specially for official Richard Mille authorized dealer, Chronopassion founded by respected collector and watch maker Laurent Picciotto.

Launched in 2000 the Chronomètre à Resonance had the effect of a tidal wave in the horological world as it was the world’s first wristwatch using the resonance phenomenon. The movement is composed of two independent balances alternatively serving as an “exciter” and “resonator”. When in motion, the balances create the resonance effect and beat in opposition, naturally evening out each other’s discrepancies and thus permitting greater accuracy.

Made from 2000 to 2005, the first generation Chronomètre à Resonance features rhodium plated brass movements and a 38mm case. The present example from circa 2003 in platinum with an attractively aged copper dial is a sight to behold. Not only does it come from its desirable early generation of the model, but it is also further complimented by its full set of accessories.

Engraved No. 191/02T, the present F.P. Journe Tourbillon Souverain in platinum from 2002 can be identified as part of the fourth generation of Journe’s Tourbillon Souverain with brass movements. Measuring at 38mm in diameter, these fourth generations were produced between 2001 until 2003 with an estimated run of 320 examples. Cased only in platinum and pink gold, these timepieces were offered with dial plates from the most common yellow gold, followed by white gold, and like the present example in pink gold as being the rarest variation.

While the very first timepieces from F.P. Journe are mostly referred to the Tourbillon Souverain and the Resonance, it is around the same time where Journe also introduced the Octa Calendrier, being the first self-winding wristwatch by the firm.  Featuring an annual calendar complication with its signature asymmetric dial with two windows for day and month indication the date is indicated via retrograde style with a central hand. The present example F.P. Journe Octa Calendrier in pink gold from circa 2006 with a 38mm diameter case belongs to an extremely rare variant featuring a black mother-of-pearl dial launched as a limited edition of 10 pieces in 2005 for Singaporean retailer Sincere Fine Watches.

With an estimated production of no more than 100 timepieces per year, German independent brand Lang & Heyne creates exclusive and innovative timepieces for watch lovers.

This season, Phillips is honoured to present the Friedrich II Remontoir “Prototype”, a unique timepiece featuring an entirely new movement developed by Lang & Heyne, made in collaboration with Phillips in Association with Bacs & Russo and The Lavish Attic. Lang & Heyne integrated a Remontoir mechanism into its Caliber VI movement, but with a slight twist, using titanium as the base material. It is almost unheard of until now, with movement made in titanium, a material which is hard to manufacture and process mainly due to its hardness and many other interesting properties that make it even harder for most manufacturers to consider it as an option to create a movement out of it.

The Friedrich II Remontoir “Prototype” model is simple and understated. The minimalistic appearance symbolises the amusement of simplicity without having to forego exclusive details. The dial indices and handcrafted hands are filled with superluminova, a non-radioactive and nontoxic afterglow pigment used to illuminate makers on watch faces. Toping it off, the bracelet was exclusively designed and produced in stainless steel just for this unique piece.

With the complex mechanism from Lang & Heyne, the serene black enamel dial, and an innovative approach to use titanium for the movement, the present timepiece is seductive and offers an tremendous combination of breakthroughs for any discerning collector. Find out more details here.

The stunning Vingt-8 Hisui featured in this season’s sale is not only a piece unique by Kari Voutilainen, but also a winner for the GPHG Artistic Crafts Watch Prize in 2014. In collaboration with one of the greatest lacquer studio in Japan, Unryuan and under the guidance of Master Tatsuo Kitamura since 2011. The beauty of the Vingt-8 Hisui is the pinnacle of passion, craftsmanship and spirit of Japanese hand-made tradition. Meticulously selected according to colour and quality, the dial is crafted with natural elements including gold dust, gold leaf, great green turban shells and abalone shell found from New Zealand. It is also worth noting that the chameleon like dial is ever-changing in shades from various angle, while viewed in its frontal manner the dial shines in green and blue, on the other hand when viewed from its profile, the dial can change into a stunning blue only shade. Operated by the Cabochon emerald set crown, the in-house movement is the very same calibre found in the Vingt-8 series. A perfect harmony that unites the artisan from the East and horology excellence from the west, this is a rare opportunity to bring home a masterpiece.

With an innovative and entertaining approach to independent watchmaking, Christophe Claret has been a master of creating complicated movements such as the minute repeater. Beginning his career as a restorer for vintage and antique timepieces, Claret’s expertise and talent was quickly noticed when he graduated from the Geneva Watchmaking School before he turned 20.

With an expertise for minute repeating timepieces, the firm released the Soprano Minute Repeater equipped with a 1-minute tourbillon escapement and an impressive Westminster chime with four hammers and patented cathedral gongs. With a futuristic design language, the case is composed of white gold for the bezel and caseback while the main case and casebands are composed of grade 5 PVD-coated titanium to maximise the quality of the chime totalling 45mm in diameter. Requiring extreme precision to achieve the perfect Westminster Chime each individual gong must be executed to the highest level of accuracy. The present example Christophe Claret Soprano Minute Repeater numbered 6 is a true horological masterpiece essentially allowing for the wearer to enjoy the Westminster Chime of the “Big Ben” on their wrist at any time they please to.

Details for more highlights of the sale include watches from independent watchmakers such as De Bethune, Gérald Genta, MB&F, Urwerk, and Laurent Ferrier are available on Phillips.com.

ABOUT PHILLIPS IN ASSOCIATION WITH BACS & RUSSO

The team of specialists at Phillips Watches is dedicated to an uncompromised approach to quality, transparency, and client service, achieving a global auction sale total of $209.3 million in 2021, the most successful year for any auction house in watch auction history.

A selection of our record-breaking prices:

Phillips is a leading global platform for buying and selling 20th and 21st century art and design. With dedicated expertise in the areas of 20th Century and Contemporary Art, Design, Photographs, Editions, Watches, and Jewelry, Phillips offers professional services and advice on all aspects of collecting. Auctions and exhibitions are held at salerooms in New York, London, Geneva, and Hong Kong, while clients are further served through representative offices based throughout Europe, the United States and Asia. Phillips also offers an online auction platform accessible anywhere in the world. In addition to providing selling and buying opportunities through auction, Phillips brokers private sales and offers assistance with appraisals, valuations, and other financial services. Visit www.phillips.com for further information.