Phillips to Host Milton Avery: A Sense of Place

Milton Avery: A Sense of Place

In association with the Milton Avery Trust & Waqas Wajahat

A Selling Exhibition to Open on July 1st in Southampton

NEW YORK/LONDON – JUNE 28th, 2021 – Phillips is pleased to announce Milton Avery: A Sense of Place, an exhibition at Phillips Southampton from July 1st through July 31st, with works available for both private sale and at auction. Curated by the artist’s grandson, Sean Cavanaugh and Waqas Wajahat, and featuring works directly from the Milton Avery Trust, Phillips will present a selection of approximately 50 works spanning three decades of the artist’s career and focusing on the different locations that served as his inspiration. Works included in the exhibition will be offered through both Phillips’ private sales platform and at auction in Fall 2021. Among the works to be offered in Phillips’ October Sales of 20th Century & Contemporary Art in London are three works from the collection of Academy Award® Winner Peter O’Toole.

Robert Manley, Deputy Chairman and Worldwide Co-Head of 20th Century & Contemporary Art, said, “Milton Avery is one of the most celebrated American artists of the 20th century, whose relevance continues to the present day. His appeal travels far beyond typical geographic constraints, a feat that is now underscored by the upcoming major retrospective of his work organized by the Royal Academy of Arts, London and curated by Edith Devaney. Among those dedicated to his work was the celebrated actor Peter O’Toole. A household name across the globe for the past five decades, the celebrated actor was a devoted art collector for much of his lifetime and built a remarkable collection, with a particular affinity for Avery’s works. For this exhibition, we are honored to have the opportunity to work with the Milton Avery Trust, the family of Peter O’Toole, Waqas Wajahat, and several other international private collections in bringing these rare-to-market works to the public.”

Despite only visiting Europe once in his lifetime, Avery aligned himself more with European experimentalism than with the American Impressionism and landscape traditions that dominated the acad 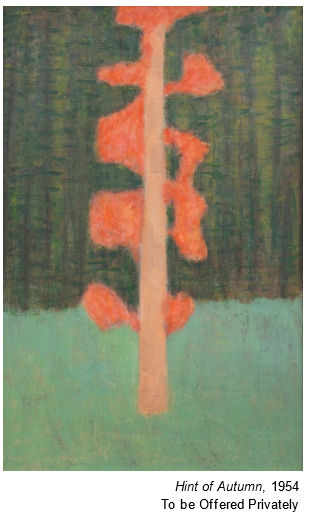 emy in the early years of the twentieth century. Milton Avery: A Sense of Place brings together a unique group of works from across three decades. Ranging from the 1930s to 1960s, the exhibition spans his illustrious career from early New York City portraits and interiors up to the landscapes of Provincetown, where he worked alongside Adolph Gottlieb and Mark Rothko. Avery’s

pivotal breakthrough in balancing color and form was an inspiration to the young emerging Abstract Expressionist artists who befriended him. Mark Rothko, Barnett Newman and Adolph Gottlieb all cite his influence in their artistic development.

Avery’s enduring legacy continues to this day, with his ability to conjure both a sense of place and atmosphere, but also in his ability to do so utilizing a very pared down composition and carefully blended layers of lambent color. Evoking many of the landscapes he took inspiration from, this exhibition includes works from Upstate New York, New Hampshire, Vermont, Gaspe Peninsula in Canada, and Cape Cod, Massachusetts. Many of Avery’s most significant works revolve around landscapes and seascapes, making Phillips Southampton a natural location for this presentation.

All three works from the collection of Academy Award® Winner Peter O’Toole were acquired from London’s Waddington Galleries by the actor in 1963-1964, following his breakout performance in the epic film Lawrence of Arabia, and have remained a treasured part of the family’s collection for five decades. Bird by Wild Sea, White Gull Resting, and Gulls in Fog each portray the shoreline, a favorite subject of Avery’s that he would return to again and again throughout his career. Leading the group is Bird by Wild Sea, 1961. Luminous and dynamic, the deceptively simple composition of the work is executed through a strikingly varied repertoire of brushstrokes, demonstrating the taut lyricism and refined simplicity that best characterizes Avery’s celebrated mature canvases.

Unless otherwise noted, all works are courtesy of the Milton Avery Trust and Waqas Wajahat, New York