Property of an International Collector: Curated by Joseph Dirand 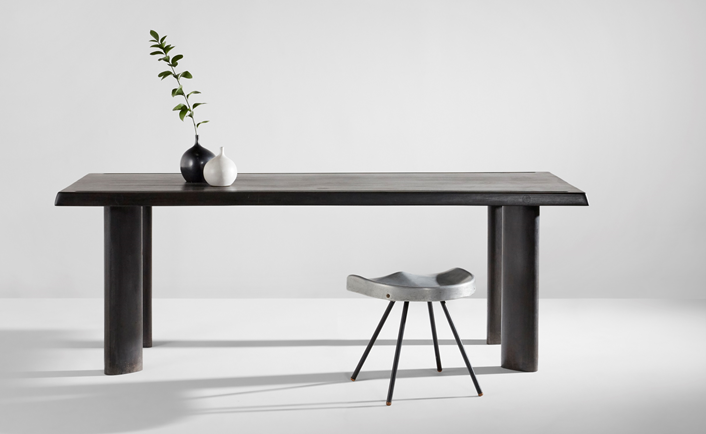 NEW YORK – 23 NOVEMBER 2021 – This December, Phillips is proud to offer a special selection of works from the collection of an esteemed private collector, curated by the celebrated architect and designer Joseph Dirand. Nearly twenty lots will be showcased in the New York Design auction on 7 December, including a selection of exceedingly rare examples of iconic forms by the most collectible architects, designers and makers of postwar France. Dirand worked closely with this collector over two decades to assemble a collection which was employed in a variety of residences internationally. Featuring exceptional works by Charlotte Perriand, Jean Prouvé, and Jean Royère, the group reflects the distinct vision of both the collector and Dirand.

Joseph Dirand said, “The first version of this project was the first time I really created this contrast between black and white, and it represents this specific period of my work. Even though my practice has evolved over the years, this project was my first big statement in Paris with that extremely minimal apartment in all black and white. That apartment has a famous window that overlooks all of Paris and captures the light of the city. That view was what we wanted to express the most and not to distract the power of this scape with too much decoration and color. The collection followed that principle and the fact that it has been curated over the years to be a part of the architecture of the space is particularly exciting.”

Cordelia Lembo, Head of Design, New York, added, “We are delighted to present this stunning selection of works in our December auction, the first Design sale to be held in our new gallery at 432 Park Avenue. Joseph Dirand has cemented his reputation as one of the most influential tastemakers of our day and the works in this collection are a testament to his vision and expertise. With the collection built during some of the most formative years of the market for French postwar design, the importance and timelessness of the works have only become more apparent, and it is our pleasure to offer them to our wonderful international community of collectors.” 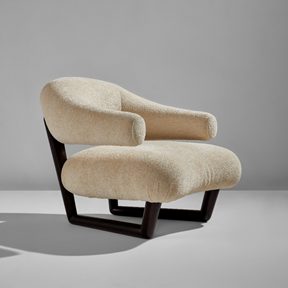 Among the top lots of the group is Jean Royère’s “Sculpture” armchair. Royère took on the mantle of the great artistes décorateurs of 1940s France and ran with it into the second half of the twentieth century. Often perceived as outside of the modernist trajectory ascribed to twentieth-century design, Royère was nonetheless informed by and enormously influential to his peers. Having opened a store in Paris in 1943 before the war had ended, he was one of the first to promote a new way of life through interior decoration, and his lively approach found an international audience early on in his career. In addition to commissions in Europe and South America, Royère had a strong business in the Middle East where he famously designed homes for the Shah of Iran, King Farouk of Egypt and King Hussein of Jordan. The sculpture armchair is one of the designer’s most iconic designs and it reflects Royere’s whimsical design approach. As the title suggests, the work is truly a sculpture in-and-of-itself. The organic form also calls to mind the aesthetics and silhouettes of other midcentury artists. 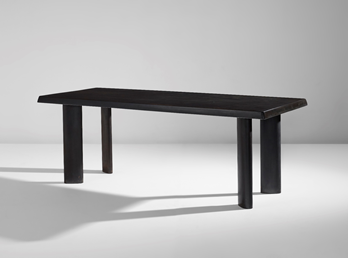 A compelling synthesis of Charlotte Perriand’s nearly eight-decade career is encapsulated in a single table from the collection, which was created circa 1960. Initially a devout modernist interested in designing furniture only in metal and glass, the genesis of the present model begins in 1928, when Perriand modeled the metal legs of a dining table after the lateral wings of early biplanes. In the same year, Perriand designed the équipement de l’habitation line (home furnishings) with Le Corbusier and Pierre Jeanneret, who named her a partner at their studio and assumed co-authorship for the home furnishings program.  The ovoid legs of the 1928 dining table would become a distinctive motif in the designer’s oeuvre and were later realized in wood. Perriand turned to wood not only out of necessity, but as a keen photographer of the natural world, she also recognized the formal value of organic forms and materials. Absent from the earlier model were the sidelong grooves, a feature Perriand devised in the 1950s and exhibited in the present model, which imbue the table with handcrafted distinction. These defining attributes served functional purposes in addition to their visual palatability: diners could avoid hitting their knees against the legs, due to their 45 degree angling, and the grooves permitted seamless alignment of table mats. The present model, made of mahogany, is notably ebonized, recalling Perriand’s tenure in Japan between 1940 and 1941, where she served as an invited advisor for industrial art to the Imperial Ministry of Commerce. Few of Perriand’s designs, whether chairs or dining tables, were stained in such a dark sheen, making the present model a rare one. 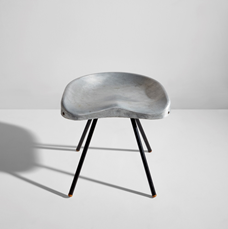 A rare stool by Jean Prouvé, model no. 307, will also be on offer. Beginning in the late 1940s and early 1950s, Prouvé took particular interest in the form, creating at least ten stool prototypes—many which employed pressed aluminum similar to the present model. The curves of the aluminum seat here reflect the designer’s consideration for ergonomics as well as his smart manipulation of the malleable material. Earlier three-leg iterations of his stools proved to be too precarious, so he added a fourth leg for greater stability. The present model was marketed as model no. 307 and presented at various design expositions throughout the early 1950s. Many of the present model stools were lacquered in red and were sometimes upholstered. The present example is particularly rare, not only because of the form’s relative scarcity but also for its elegant aluminum seat. 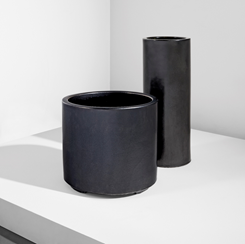 The collection also includes an impressive selection of ceramics by Georges Jouve. Working out of his studio in Paris (and later in Aix-en-Provence), Georges Jouve produced sculptural ceramics for modernist interiors. He created rigorously simple yet soft and playful forms, including plump, contrapposto vessels, rotund pitchers and cylindrical vases. His tireless experimentation of glazes led to a palette of perfect matte blacks, bone whites and joyful pops of lime green, lemony yellow and, occasionally, selenium red. Jouve's ceramics echo the organic modernism of his CAF colleagues, such as Charlotte Perriand and Serge Mouille. Several iconic forms are represented in this group, specifically the “Boule” vase form and the “Cylindre” vase form, the latter of which are especially notable for their large size. These examples also employ the matte black glaze, a signature of Jouve, which directly links to Dirand’s overall aesthetic.