Hot on the Heels of the Strong Performance of REFRESH: RELOAD Online Sale, with 100% Watches Sold

Rare and Exceptional Patek Philippe Timepieces to Lead the Sale

HONG KONG – 3 JUNE 2020 – Following a record year for watch sales at Phillips Asia in 2019, and 100% sell-through rates for watches offered in the recent REFRESH:RELOAD online auction, Phillips in Association with Bacs & Russo is pleased to unveil highlights from The Hong Kong Watch Auction: X. Taking place on Friday, 10 July, the auction is comprised of over 260 lots, including vintage and modern collectors’ timepieces from the most prestigious manufacturers.

Thomas Perazzi, Head of Watches, Phillips Asia, said, “The Hong Kong Watch Auction: X represents an important milestone as we celebrate Phillips’ fifth year anniversary in Asia and the tenth watch auction in Hong Kong. In the past five years, we have introduced many new discoveries to the market, achieved an extraordinary number of world auction records, and a white glove sale. The passion that Phillips’ Hong Kong watch department has for unearthing the world’s rarest and most collectible watches never ceases, as well as an uncompromised focus on quality, rarity and freshness-to-the-market. We are delighted to bring forward on 10 July an incredible selection of collectible timepieces, including some of the most important modern and vintage Patek Philippe wristwatches, led by a well preserved reference 2499/100 fourth series in yellow gold, and a possibly unique reference 3448/14 in 18k white gold, offered by the family of the original owner. In addition, we are excited to present three sections of the sale dedicated to the World Time by Patek Philippe, the finest examples from Patek Philippe and Rolex retailed by Tiffany &Co., and an extravagant selection of salmon dials from the 20th and 21st century.”

A Reference 2499/100, the fourth and last generation of Patek Philippe’s most iconic perpetual calendar chronograph wristwatch originally launched in 1950. The present watch (illustrated page 1) in yellow gold from 1982 is a phenomenal sight to see. Offered in excellent overall condition, the case is very well-preserved with crisp edges and bevels, defined fluted lugs with sharp and unrubbed hallmarks stamped behind, a very attractive and original dial, which is rare in its own respect. It features the last three digits of the case number hand-engraved on the inner rim of the bezel as well as the caseback, which is unusual and rare to come across.

Reference 3448 was the first self-winding perpetual calendar wristwatch made by Patek Philippe and was introduced to the market in 1962. According to literature, there were 586 examples manufactured, 130 were cased in white gold with only 14 examples known to be fitted with an integrated bracelet. The present example (illustrated page 1) with an integrated bracelet without the usual pointed lugs belongs to a possibly unique variant of the much-appreciated reference. Furthermore, it is double-signed by Swiss retailer “Gübelin”, which takes its rarity to a whole new level and is stamped with -14 is the first example to ever surface on the market.

Reference 3979 was one of the complicated watches launched in 1989 to celebrate Patek Philippe’s 150th anniversary. It was the first ever automatic minute repeater produced by the brand, and was sold with an enamel dial reminiscent of its traditional past and pocket watches. Produced from 1989 until 2002, only 100 examples of this reference were made, with the majority in yellow gold and approximately a dozen in platinum. The present watch is one of five known to the market and is in excellent overall condition.

While Patek Philippe’s reference 5013 spanned two centuries, first released in 1992 and discontinued in 2010, it has the classic charm and iconic style of early 20th-century watches with a tonneau-shaped case and grand complication movement featuring repeat function combined with perpetual calendar and moon phase. With a long production span and with only 101 examples believed to be produced across four materials: yellow gold, pink gold, white gold and platinum, the reference 5013 is certainly a highly complicated timepiece to manufacture and is incredibly rare. 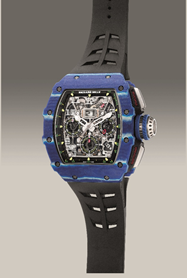 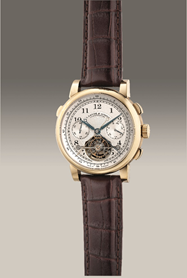 Regarded as one of the grail limited edition pieces with extreme interest in the market, The RM11-03 Jean Todt was Richard Mille’s first wristwatch to be encased in blue Quartz TPT and forged carbon. It was launched as a limited edition of 150 pieces to commemorate 50 years of the lauded former rally driver and CEO of Scuderia Ferrari, Mr. Jean Todt. Never before offered at auction, the present example numbered 46 is presented in excellent overall condition and is further charmed by the full set of accessories.

Introduced as a limited edition of 50 pieces in 2010, the A. Lange & Söhne Tourbograph “Pour le Mérite” in 18K honey gold belongs to an important collection of highly complicated wristwatches paying homage to F.A. Lange. Regarded as one of the most complicated wristwatches manufactured by the firm, the first Tourbillon “Pour le Mérite” wristwatch was introduced in 1994. As a modern iteration of the highly complicated timepiece, the reference 712.050 is further enhanced by combining all elements together, and it is the first timepiece to incorporate a tourbillon, rattrapante chronograph and fusée-and-chain transmission by any manufacturer.

This season Phillips is pleased to offer a fine selection of one of the most versatile and practical timepieces on the market today, Patek Philippe’s World Time wristwatch. Sophisticated in mechanical design with a classic aesthetic, each of the seven examples demonstrates the wide appeal the World Time wristwatch has amongst collectors today, as well as Patek Philippe’s genius in creating a diverse collection of wristwatches.

Produced in 300 examples, the Patek Philippe 5230G New York Special Edition was one of the most sublime and charming timepieces released by the brand in conjunction with its “The Art of Watches Grand Exhibition” in New York in 2017. Based on the traditional reference 5230G World Time with the caliber 240 HU, automatic movement with micro-rotor, the watch has an opaline blue dial with an Art Deco metal relief of the Manhattan skyline.

In 2019, Patek Philippe introduced a new World Time reference 5231J-001, the first model of its reference to feature

craft to the highest level. To achieve the perfect “cloisonné” enamel dial, a thin gold wiring known as “cloison” are carefully sculpted to create the outline of the desired motif then applied on the surface of the dial. The present watch is in excellent overall condition and is the first example of the reference to be offered at auction.

Over the past century, Tiffany & Co. has risen to be one of the most respected and renowned luxury names in the world. In the section dedicated to Tiffany & Co., Phillips presents the finest examples from Patek Philippe and Rolex.

Tiffany & Co. and Patek Philippe have been working together for over one and a half centuries. Tiffany & Co. sold their first Patek Philippe timepiece in 1851, and on December 22, 1854 Antoine Norbert de Patek met Charles Lewis Tiffany in New York, shaking hands over a partnership that is as strong today as it was back then. The relationship between Rolex and Tiffany & Co. began in the late 1950s, with Tiffany &Co. stamping Rolex dials with their name at their US service center. Subsequently, stamping was increasingly done in Geneva by Rolex. For decades, co-branded Rolex pieces could be serviced either at Rolex or at Tiffany & Co., but in the early 1990s, Rolex decided to no longer supply co-branded watches. As Rolex pieces co-signed by Tiffany & Co. are no longer in production, the few examples made between the 1950s and the 1990s are rare and outstanding treasures.

The dial is undisputedly the “face” of a watch: most of the first impression a watch gives to beholders is indeed entrusted to this component. Pink, rose, salmon dials have been employed for decades without any measurable loss of appeal. And pink dial variations of some vintage models are among the scarcest and most collectible examples of the reference, contributing to the ongoing mythical appeal of this color. Furthermore, the fact that one can find rose dials in the 1940s as well as in the 1990s and in contemporary timepieces undeniably suggests an objective aesthetic appeal of this soothing hue.

This season, Phillips has dedicated a section of the sale to salmon dials, offering examples ranging from the early 20th century to current production models, allowing for a bird’s eye view of the evolution of this timeless and supremely attractive dial color.

Reference 5270 was first launched in 2011, which replaced 5970. The present watch, reference 5270P, was the brand’s latest iteration that launched in 2018 and for the first time available in platinum for this reference. Being offered at auction for the first time, the present watch is in mint and unworn condition, representing an opportunity to own one of the most striking timepieces in Patek Philippe’s current collection.

Introduced in 1963, the Rolex Day-Date reference 1802 with a polished bezel is most certainly rarer than its latter reference 1803 with a fluted bezel. The present example in 18K white gold features a much desired and attractive “Salmon” dial which contrasts beautifully against the white gold case with matching silvered hands and baton indexes.

Link to the images of highlights: https://www.dropbox.com/sh/ghmzeiathpn1jvr/AACassyyf5b2wUbBKNRjwvdJa?dl=0