Phillips in Association with Bacs & Russo Announces Highlights ahead of The Geneva Watch Auction: XV on 7 & 8 May

Phillips in Association with Bacs & Russo Announces Highlights ahead of The Geneva Watch Auction: XV on 7 & 8 May 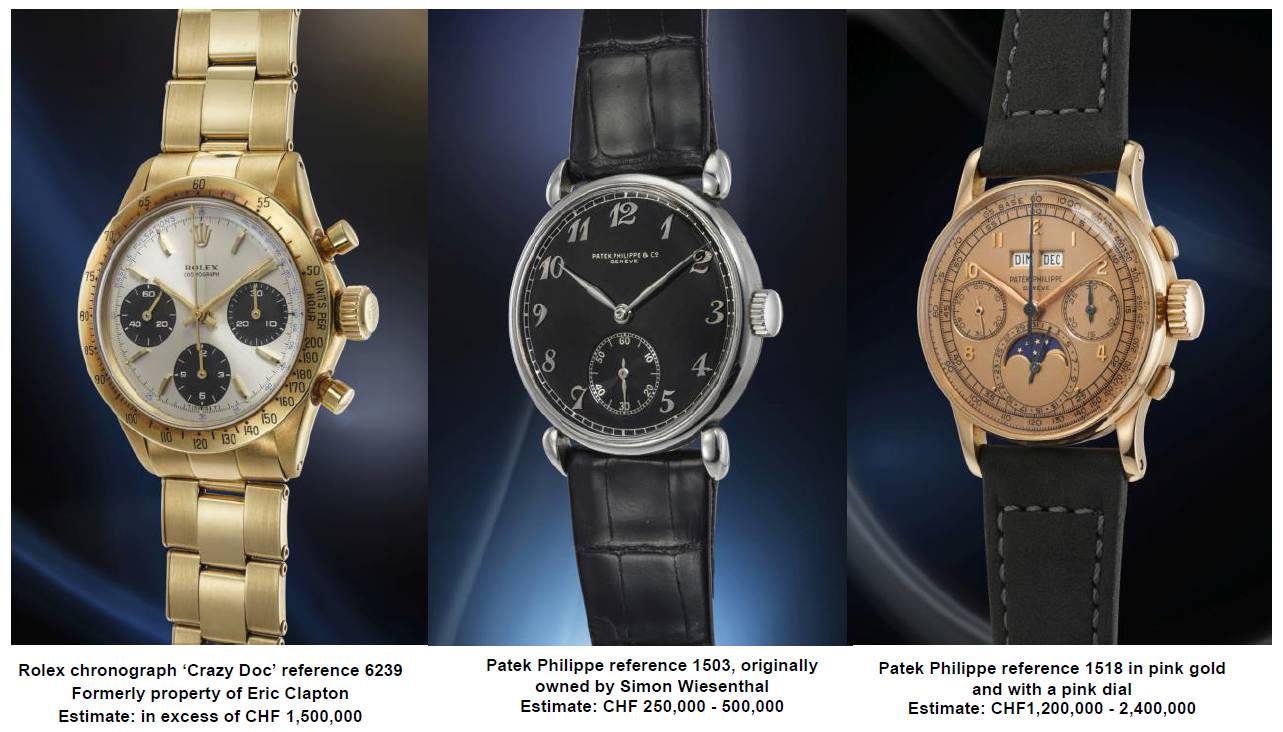 GENEVA, 22 March 2022 - Phillips in Association with Bacs & Russo is pleased to announce highlights ahead of The Geneva Watch Auction: XV. This auction follows a blockbuster white glove year in 2021, in which Phillips Watches department achieved an annual total of $209.3 million and sold 100% of lots across all sale locations. The live sale will take place on 7 and 8 May at the Hôtel La Réserve in Geneva, after the “The Royal Oak 50th” thematic sale on 6 May.

Leading the sale are three exceptional watches. The first is a well-preserved Rolex chronograph wristwatch reference 6239 in yellow gold which was formerly part of the collection of Eric Clapton CBE (162922 estimate in excess of CHF 1,500,000). The second is an outstanding example of the Patek Philippe pink gold reference 1518 with a pink dial (157572 estimate CHF 1,200,000-2,400,000).

The third is a historically significant Patek Philippe reference 1503 in stainless steel with black glossy dial and Breguet numerals –notably one of two examples known in this configuration. Manufactured in 1941, this watch belonged to Simon Wiesenthal – one of the world’s greatest human rights champions and holocaust survivor (164129 estimate CHF 250,000 - 500,000).

Alexandre Ghotbi, Head of Watches, Continental Europe & Middle East, and Tiffany To, Head of Sale, Geneva, stated: “After an immensely successful year in 2021, we are excited to be back with what we consider to be a tightly curated selection of timepieces spanning the 20th and 21st centuries, demonstrating the savoir-faire, technical and design prowess of the watch industry. These are watches that will attract the budding enthusiast and speak to the seasoned collector. However, what they all have in common is their rarity, state of preservation and relevance.”

The selection ranges from important watches by Patek Philippe and a wide selection of Rolex timepieces, to creations by independent watchmakers. There is an expansive range of timepieces on offer this season, from an early Patek Philippe perpetual calendar and a vintage Rolex model such as a ‘Killy’, ‘a Paul Newman’ Daytona to a Submariner early chronograph and, a Padellone.

Phillips is proud to offer a historically important yellow gold reference 6239 with pulsations scale, formerly part of the collection of Eric Clapton CBE (162922 estimate in excess of 1,500,000 CHF). Known as the ‘Crazy Doc’, the present watch is prominently illustrated in ’Ultimate Rolex Daytona’ by Pucci Papaleo Editore. One of the most important Rolex Daytonas to ever be offered at auction, the present watch is the only known yellow gold reference 6239 with pulsations dial. Having originally been sold in Italy in the 1990’s to Eric Clapton, the present watch made its public debut when it sold at auction in 2003, which marked the first time Eric Clapton publicly sold watches under his name.

A further highlight of the sale is the ’Paul Newman’ Rolex reference 6241 Daytona, also known as a ’John Player Special’ (165415 estimate CHF 700,000 - 1,400,000). Offered in exceptional and original condition, the present ’Paul Newman’ Rolex is one of the most exclusive variants in existence.

The historically significant Patek Philippe reference 1503 in stainless steel wristwatch with black glossy dial and Breguet numerals is one of two examples known in this configuration. Manufactured in 1941, this watch is important not only for its rarity but also because it was once owned by the human rights champion and holocaust survivor Simon Wiesenthal (164129 estimate CHF 250,000 - 500,000).  The present watch first appeared on the market in 2007, and it was consigned at public auction by the family of Simon Wiesenthal himself. Since then, it has not been seen on the public market until its reappearance this year. This watch is one of the rarest iterations of reference 1503: only one other example is known with black lacquered dial and Breguet numerals, making this watch one of two known examples of the reference 1503 produced by Patek Philippe in the four years between 1941 and 1944.

Born in 1908 on 31 December, Simon Wiesenthal is remembered as a champion of justice and a human rights campaigner, having dedicated his life to keeping alive the memory of the Holocaust and its victims and bringing its perpetrators to justice.  Having studied architecture in Prague from 1928 to 1932, Wiesenthal’s life was turned upside down in 1939 by the outbreak of war and the Nazi regime. Following the invasion of Poland, Wiesenthal spent time in prison camps, including at the infamous Mathausen Camp, from which he was liberated in 1945. After the war, Wiesenthal dedicated his life to tracking down Nazi criminals, also founding the Jewish Historical Documentation Centre in Linz, Austria in 1947, with the goal of gathering information and documents which could be later used in the war crime trials for Nazi criminals.

Phillips is proud to present an outstanding pink gold reference 1518 with a pink dial – one of the most sought-after variants of the model on the market today (157572 estimate CHF 1,200,000 - 2,400,000). The iconic reference 1518 has always been considered a stellar timepiece, but in recent years there has been a marked increase in interest in the watch. This example offers a rare opportunity for collectors to own a true legend of watchmaking, ticking all the boxes with its impressive provenance, coming from a world-famous collection that was sold at auction under the title ‘A Connoisseur’s Vision’ , pristine condition, and the highly sought-after pink dial.

An additional highlight of the sale is a unique pink gold Octa Zodiaque by F.P. Journe offered without reserve, the proceeds of the sale of this watch will be donated to, Children Action (168190 estimate CHF 150,000 - 300,000). Children Action is committed to providing services that help children and responding to humanitarian needs

Harry Winston’s Opus 3 will feature in the sale. Made in collaboration with Vianney Halter, this particular watch is cased in platinum and set with diamonds – it is one of only 5 examples ever made (167003 estimate CHF 100,000 - 200,000).

ABOUT PHILLIPS IN ASSOCIATION WITH BACS & RUSSO

The team of specialists at Phillips Watches is dedicated to an uncompromised approach to quality, transparency, and client service, achieving a global auction sale total of $209.3 million in 2021, the most successful year for any auction house in watch auction history.

A selection of our record-breaking prices:

Phillips is a leading global platform for buying and selling 20th and 21st century art and design. With dedicated expertise in the areas of 20th Century and Contemporary Art, Design, Photographs, Editions, Watches, and Jewelry, Phillips offers professional services and advice on all aspects of collecting. Auctions and exhibitions are held at salerooms in New York, London, Geneva, and Hong Kong, while clients are further served through representative offices based throughout Europe, the United States and Asia. Phillips also offers an online auction platform accessible anywhere in the world. In addition to providing selling and buying opportunities through auction, Phillips brokers private sales and offers assistance with appraisals, valuations, and other financial services.