Identity of Artist to be Revealed Before Sale 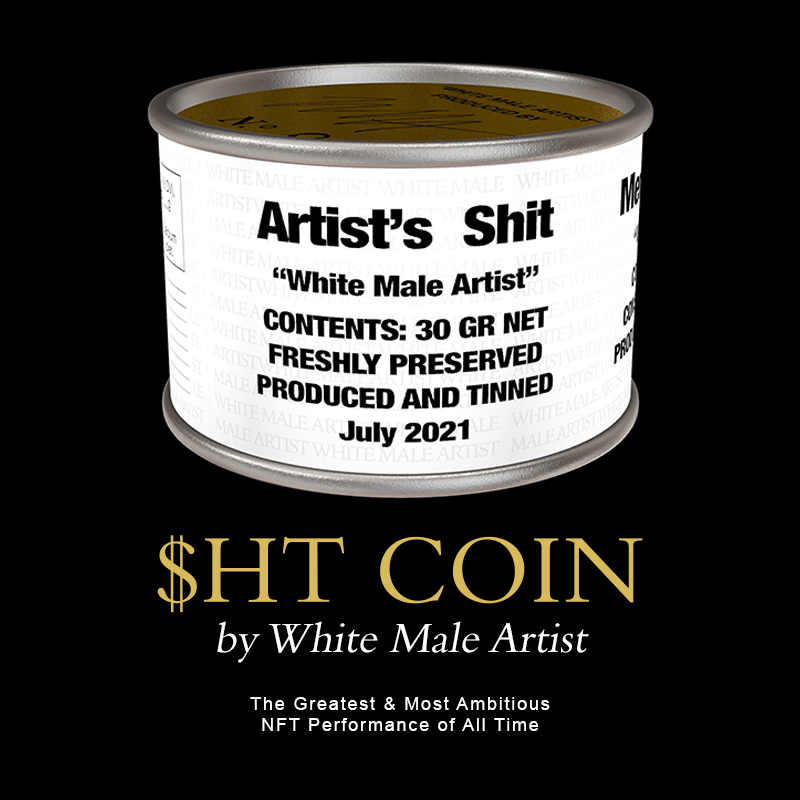 NEW YORK - 17 JUNE 2021 -  Phillips is pleased to announce the offering of $HT Coin, an exclusive NFT art project by the critically acclaimed “White Male Artist” (WMA), who will reveal his identity as the project culminates on 29-30 July. White Male Artist is a widely respected pioneer in his field and his work has been exhibited all over the world. The first phase of bidding for the NFTs opens on 1 July through  Snark.art, with the second phase on Phillips.com taking place from 29-30 July.

$HT Coin directly refers to the Italian conceptual artist Piero Manzoni and his most famous piece, Merda D'Artista (Artist’s Shit), 1961. White Male Artist has taken his inspiration from Manzoni, who is best known for his ironic approach to avant-garde art and his work is widely seen as a critique of mass production and consumerism. Manzoni is famous for saying, “If collectors want something intimate, really personal to the artist, there's the artist's own sh*t, that is really his.”

Manzoni’s original piece consisted of 90 cans, each filled with 30 grams of stool and were sold for the same price as 30 grams of 18-karat gold, which was about $37 at the time. As an homage to Manzoni, the starting bid for each $HT Coin will be today’s equivalent price for 30 grams of gold, roughly US$1,800.

To be produced daily, each unique $HT Coin can will contain a nutritional label detailing what White Male Artist has consumed within a 24-hour cycle. White Male Artist will eat meals based on the diets of the most financially successful white male artists of the 20th century: Jeff Koons, Banksy, Gerhard Richter, Brice Marden, Andy Warhol, and many more.

$HT Coin will be offered in two phases -- the first is an exclusive preview offering where White Male Artist will make drops of excrement each day for the month of July. This private pre-sale will be minted on the Ethereum blockchain and auctioned through the innovative NFT minting house Snark.art.

On 29-30 July, the second and final phase of the auction will be conducted by Phillips at which point the highly anticipated identity of White Male Artist will be revealed.

Snark.art is a digital laboratory and innovative NFT marketplace that collaborates with international artists, curators, and artistic partners to explore creative possibilities of emerging technologies such as blockchain, AI, AR/VR, among others.