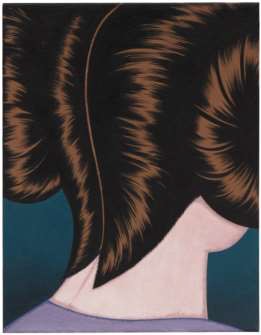 $6,000. Articker has shown that Curtiss’s media presence has increased by more than 775% over the last 24 months.

NEW YORK – 6 August 2020 – Today, Phillips announces the debut of Articker, a groundbreaking proprietary technology product that aggregates open-source data on artists and artworks, providing unique insights into emerging market trends. Developed in partnership between Phillips’ digital team and Articker, the platform will provide Phillips clients with unprecedented visibility on emerging trends in the art world and will expand and enrich Phillips’ robust digital growth through advanced open-source intelligence on artists and artworks from the 20th and 21st centuries.

Founded in 2014, Articker tracks the global art publishing world, with a database comprising more than 16,000 online publications and accumulating information from 50,000 other editorial sources, including galleries, museums, and art fairs, aggregated in real-time. Articker was created by Tomasz Imielinski, a pioneer in the field of association rule learning and a professor of computer science at Rutgers University; and Konrad Imielinski, a data scientist specializing in search technology and economics. In partnership with Phillips, Articker is able to precisely offer insight into trending stories both globally and locally, offering a unique real-time view on artists ranging from blue- chip masters like Pablo Picasso to those currently graduating from MFA programs. The data surrounding this cohort of more than 150,000 artists is aggregated to provide a clearer perspective on artists’ trajectories over time, relationships between artists, geographical coverage, and value correlations.

“Articker encompasses one of the largest data sets in the world of visual artists. By looking beyond pricing information, it provides us with a more holistic view of an artist’s place within the market,” states Edward Dolman, Phillips CEO. “Phillips’ team of international specialists take pride in our ability to provide unique insight into the market at large and Articker will democratize this access to globally sourced information about the world’s leading artists. Digital innovation is a top priority for Phillips and Articker’s value as a tool for our staff and clients will be immeasurable. Articker further demonstrates Phillips as a leader in information and data on art beyond the market, which is a major milestone for the company.”

Professor Tomasz Imielinski, Co-Founder of Articker, said, “In such a relatively static market with infrequent and opaque pricing data, Articker creates an alternative valuation system for artists. This system is based on measuring each artist’s media presence by continuously crawling and analyzing tens of thousands of online sources. The power of Articker is that we provide complete real-time coverage of what is written online on any artist.”

Designed as an ever-growing open source database, Articker will broaden over time providing more robust information and digital content on Phillips, distinguishing the auction house as a destination for research and analysis for artists and artworks of the 20th and 21st centuries.  For example, artist Amoako Boaffo whose painting The Lemon Bathing Suit marked the artists’ debut at auction in 2019, sold at Phillips for £675,000 more than twenty times its low estimate. Articker data on Boafo indicates that the artists’ media presence has increased by 2406% over the past 18 months. Similarly, Phillips debuted artist Tschabalala Self’s work Lilith at auction in 2019, tripling its low estimate to sell for £125,000. Articker data shows that Self’s media presence has increased by 174% in the past 18 months while Julie Curtiss’s media presence has increased by more than 775% in the past 24 months, mirroring this rise in the media her painting Princess sold for more than 15 times its low estimate of $6,000 for $106,250 at Phillips in 2019. These cases illustrate the correlation of art market trends to media trends, with Articker offering invaluable insight as to who the emerging talents of the future might be.

Phillips is a leading global platform for buying and selling 20th and 21st century art and design. With dedicated expertise i n the areas of 20th Century and Contemporary Art, Design, Photographs, Editions, Watches, and Jewelry, Phillips offers professional services and advice on all aspects of collecting. Auctions and exhibitions are held at salerooms in New York, London, Geneva, and Hong Kong, while clien ts are further served through representative offices based throughout Europe, the United States and Asia. Phillips also offers an online auction platform accessible anywhere in the world.  In addition to providing selling and buying opportunities through auction, Phillips broker s private sales and offers assistance with appraisals, valuations, and other financial services.

Articker was founded in 2014 by father and son duo Tomasz and Konrad Imielinski. Tomasz Imieliński, PhD is a computer scientist and professor of computer science at Rutgers University. He has published more than 150 papers and is an inventor and co-inventor on multiple patents ranging from search technology to web data extraction as well as multimedia processing. He has served as chairman of computer science department at Rutgers from 1996 till 2003. In 2000 he co-founded Connotate Technologies, later acquired by import.io. From 2004 until 2010, he has held multiple positions at Ask.com, from Vice president of data solutions to executive vice president of global search and answers and Chief Scientist. He has also served as VP of Data Solutions at IAC