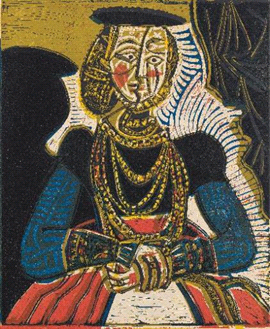 NEW YORK – 14 JULY 2020 – Phillips’ sale of Editions & Works on Paper, New York will livestream from New York and London to bidders worldwide across two sessions July 23-24. The sale features superlative works on paper and prints and multiples spanning the 20th and 21st centuries, including a dynamic selection of modern works by Escher, Dalí, Dubuffet, Marcoussis, Matisse and Miró, along with contemporary editions by Baldessari, Dine, Diebenkorn, Haring, Hockney, KAWS, Longo, Rauschenberg, Ruscha and Twombly. The day session of the sale also features a remarkable group of works never offered at auction before from the Museum of Modern Art benefitting the museum’s acquisition fund. This sale follows on a series of unprecedented online Editions sales that achieved record prices for prints by Genieve Figgis, Leon Polk Smith, Alexander Calder, Sonia Delaunay, Zao Wou-Ki, Peter Saul and Felix Gonzalez-Torres, amongst others.

Kelly Troester and Cary Leibowitz, Phillips’ Worldwide Co-Heads of Editions, said, “We are excited to be back offering a strong selection of works showcasing the best works from the 20th and 21st centuries through a combination of traditional live and enhanced online auction technologies. We were thrilled at the results of our three online Editions sales we held since April which averaged 98% sold by lot, and expect similar enthusiasm for this diverse group consigned from a number of estates and private collectors.”

The sale is anchored by the elegant Portrait de jeune fille, d'aeprès Cranach le Jeune by Pablo Picasso. This is Picasso’s first and most important linoleum cut print, made using four blocks printed in color and one in black. This particular impression demonstrates the dimensionality of the bold color, as well as the luxuriousness of the glossy, smooth black. Created in 1958 this influential work is indicative of Picasso’s inventiveness as an artist and his devotion to reimagining personally impactful art historical images. Portrait de jeune fille, has been written about extensively and exhibited in institutions and galleries worldwide.

A special group of works from the Museum of Modern Art, New York will be offered in the Day Sale to benefit the museum’s acquisitions fund. These works include iconic, early Pop prints by Roy Lichtenstein, specifically Crying Girl, 1963; Brushstroke, 1965; Sunrise, 1965; Landscape 1, from Ten Landscapes, 1967 and Whaam! Poster, 1967. The five early Lichtenstein works were bequest to the museum by collector Jan Cowles in 2019. Also being offered to benefit MoMA’s acquisition fund is Henry Moore’s Four Reclining Figures, a lithograph from 1973, bequest to MoMA by collectors Nina and Gordon Bunshaft. Gordon Bunshaft is a modern and post-war architect, whose notable buildings include the Lever House in New York and the Hirshhorn Museum and Sculpture Garden in Washington, D.C.