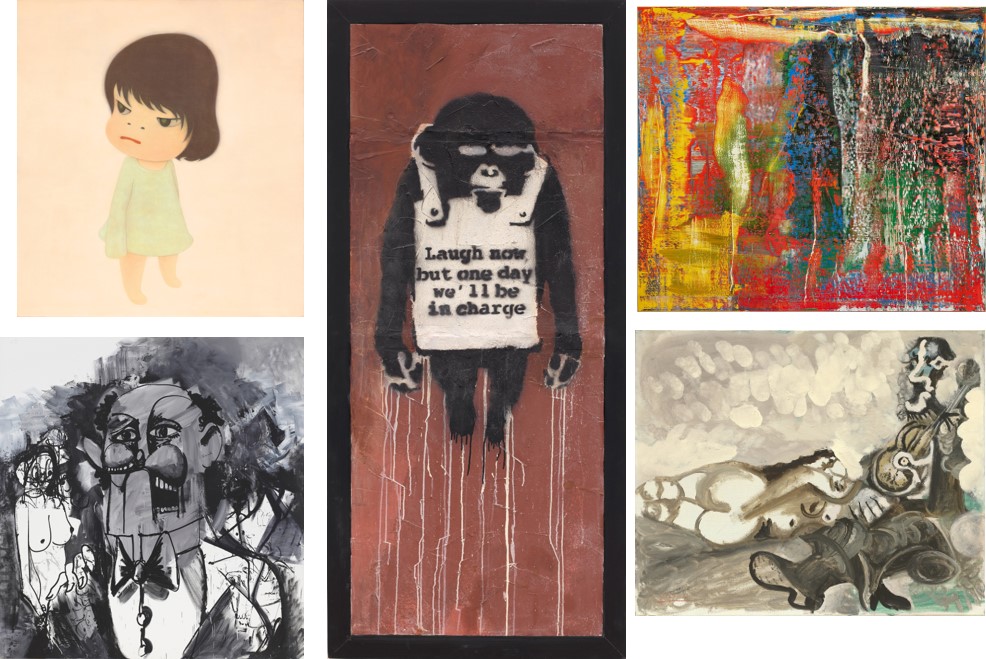 HONG KONG – 24 May 2021 – Phillips is pleased to present the full offering of its Hong Kong-Beijing dual-location 20th Century & Contemporary Art & Design Sales in collaboration with Poly Auction, following the earlier announcement of leading highlights including Yoshitomo Nara’s Missing in Action executed in the artist’s watershed year of 2000, Gerhard Richter’s Abstraktes Bild (940-7) offered for the first time at auction, and Banksy’s Laugh Now Panel A to be sold with the option for the buyer to pay with cryptocurrency. The Evening Sale on 8 June presents a stellar line-up of works by the most prominent international names, including George Condo, Pablo Picasso, Yayoi Kusama, Zhang Xiaogang and Matthew Wong. The Day Sale on 7 June offers an exceptional selection of art, design, editions and sculptural pieces of unparalleled diversity. In addition, a group of emerging female and African American artists will be making their Asia auction debut across Day and Evening Sales this season.

With a total estimate in excess of HK$371 million/ US$47.8 million, the Spring 2021 season marks the highest valued 20th Century & Contemporary Art and Design sales at Phillips Asia.

Jonathan Crockett, Chairman, Asia and Isaure de Viel Castel, Head of 20th Century & Contemporary Art, Hong Kong, said, “We are delighted to present an exceptional collection of distinguished works with rich diversity for this season’s brand-new format of dual-location sales in partnership with Poly Auction – from Western masterworks by Pablo Picasso and Gerhard Richter, top quality Asian pieces by Yoshitomo Nara and Zhang Xiaogang, to emerging names such as Loie Hollowell and Salman Toor. With our continued focus on digital innovation, we are excited to be the first major auction house in Asia to accept cryptocurrency as a payment method for a physical artwork. The new purpose-built auction room in Hong Kong will feature a dynamic video wall behind our auctioneer, enhancing the live streaming experience for the online audience around the world. Through the use of new technologies, we look forward to reaching an increased number of collectors.”

The Evening Sale will feature Nu couché et musicien, a painting by one of the most influential artists of the 20th century, Pablo Picasso. Executed in 1967, the present work is an exquisite example of the artist’s fascination with the motif of artist and the model. Throughout the 1960s, Picasso was consumed by a series of works on this subject and executed several variations on the theme. In Nu couché et musicien, he depicted the figure of the artist as a musician, while a naked woman listening to the music being played for her, inviting viewers into their romantic world. Bearing all the hallmarks of its own creation, the painting shows the artist’s own movements with the brush as he has frenetically applied paint to the surface, and reflects his own passion for art, music and romance.

Recognised as one of America’s most influential living artists, George Condo frequently cites Picasso as a predominant influence in his contemporary cubist compositions. A stunning example of the artist’s work executed in black and white, Sketches of Jean Louis is the largest black and white portrait work by Condo to have ever come to auction. The painting was created with expressive brush strokes as various elements twist and blend together, bringing the characters to life. In doing so, Condo merges the tradition of portraiture as being representative of the self, with an unsettling sense of manic horror and the uncanny. To be offered in the Day Sale, Condo’s Woman on Red Chair pays tribute to Picasso’s masterpiece Woman in a Red Armchair (1932). Picasso’s ability to create a sense of spatial and emotional dislocation prefigured Condo’s brand of ‘Psychological Cubism’, showcased at its best in the present work.

Following the successful sale of Matthew Wong’s River at Dusk in Hong Kong last December, which set a new auction record for the artist, Phillips is pleased to offer two stunning landscapes by Matthew Wong in the Evening Sale. Figure in a Night Landscape is a significant work to come to auction: one of Wong’s early nightscapes that was featured in his monumental KARMA debut, which was his first solo show in New York and marked a pivotal moment for the artist that effectively launched his career. The present work is one of only seven canvas works displayed at the artist’s groundbreaking introduction to the art world. Further, it is the only oil on canvas work from the show that depicts a landscape at night, making it an exceptionally rare piece from this exhibition.

Untitled (PILGRIM) is a sublime example of Wong’s dazzling, richly textured imaginary landscapes that have resonated with audiences around the world. Untitled (PILGRIM) derives from memories and his mental database of artists and artworks he encountered online, spanning centuries and genres, from Van Gogh to Brenda Goodman and Kanye West. As an acrylic work on paper, Untitled (PILGRIM) also symbolises the flexibility of Wong’s working method and shows influences from both traditional and contemporary Chinese artists’ use of paper for landscapes.

Debut of Works by Western Artists in Asia

This season’s sales will also be the auction debut in Asia for several western artists, including Theaster Gates, Chantal Joffe, Nathanial Mary Quinn, Alex Gardner, Lesley Vance, and Jadé Fadojutimi. Theaster Gates was at the centre of an artistic project at Fondazione Prada’s Rong Zhai in Shanghai recently. Dirty Red, a monumental work by Gates presented in this season’s Evening Sale is a tremendous work from his celebrated Civil Tapestry series. It is not just the largest work from this series to come to auction, but also the largest work by the artist to have ever come on the market. A talented female artist who is making her Asia auction debut in the Day Sale is Chantal Joffe, whose large-scale paintings bring a uniquely contemporary approach to the genre of figurative art. Nathaniel Mary Quinn’s collage-like composite portraits probe the relationship between visual memory and perception. Fragments of images taken from a variety of sources, from fashion magazines to family photographs, are copied by hand and fused together to form hybrid faces and figures. He found a way to harness traumatic life experiences through these portraits of his past that evoke the striking intimacy and intensity of a face-to-face encounter.

This season’s Day Sale will feature a section dedicated to avant-garde artists who use digital and emergent technologies for creating artworks, including teamLab, Julian Opie, Tony Oursler and James Turrell. Highlighting the section is Flowers and People – Dark, a computer program that continuously renders the work in real time by teamLab, marking the first time an interactive digital work to be featured in an auction.

The Design category has achieved a 100% sell-through rate for four consecutive seasons in Phillips’ Hong Kong sales, demonstrating the strong demand in this field from Asia. This season’s Day Sale brings together important works of 20th and 21st century design by highly influential architects and designers such as George Nakashima, Gio Ponti, Hans J. Wegner, Ole Wanscher, and Ico Parisi. Among the highlights is a set of six 'Grass-Seated' chairs by George Nakashima, who produced some of the most original and influential furniture designs of the post-war era. In addition, Joyce Wang, an award-winning interior designer and the founder of Joyce Wang Studio, who has gained reputation in luxury hospitality and residential design, will be given a dedicated area at the Hong Kong pre-sale exhibition, to curate a selection of design items and art pieces for “Pantone 5015C by Joyce Wang”. For the Pantone project, the chosen “sulking pink” colour bathes the curated pieces in warmth. She creates living vignettes by juxtaposing the furniture pieces and artworks against moldings found in classical homes.

The live auction will be streamed to audiences worldwide on Phillips.com and the Phillips app, as well as on the Poly Auction app and WeChat Mini Program.

*Please download the PDF for full press release with images