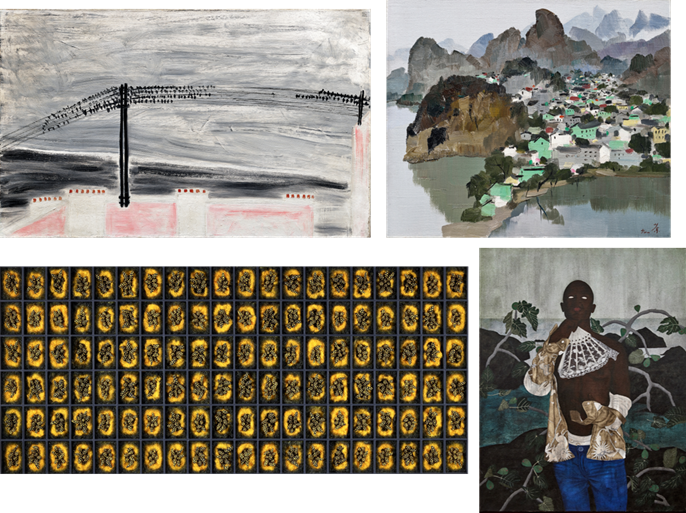 HONG KONG – 27 September 2021 – Phillips and Poly are pleased to announce that they will continue to partner in presenting another season of 20th Century & Contemporary Art & Design Sales in Hong Kong this Fall. The strategic partnership is followed by the 100% sold, double 'white glove' 20th Century & Contemporary Art & Design sales held in June, which realised HK$702 Million/ US$90.4 Million. Early highlights for the forthcoming sales include a rare and precious work created by Sanyu in the 1930s, Wu Guanzhong’s symbolic Chinese modern landscape from the 1990s, a museum-quality sculptural piece executed by Yayoi Kusama in 1998, and a striking example painted in 2018 by Cinga Samson to mark the artist’s auction debut in Asia.

Jonathan Crockett, Chairman, Asia, Phillips, said: “Establishing a broader foothold across Asia has been a vital part of Phillips’ business strategy for expansion and growth in recent years. Our mutually beneficial partnership with Poly Auction has deepened our visibility in mainland China, a key growth market. Strong participation from our Asia-based collectors was seen in last season’s 20th Century & Contemporary Art & Design sales held in June, which saw 86% of lots selling above their high estimates, reflecting our continued strong momentum in the region. We look forward to another successful partnership with Poly Auction this sale season in Hong Kong.”

Alex Chang, Chief Executive Officer of Poly Auction (Hong Kong) Limited, said, “The two joint auction seasons held by Poly Auction and Phillips have achieved remarkable results, and these excellent performances demonstrate the art market’s recognition of the strong impact through combined resources by both houses. As the art auction market has drastically changed since the pandemic began, Poly Auction has been shifting our business strategy towards a more innovative way and serving collectors in the region by retaining a good vision and being forward looking. By partnering with Phillips again, I believe that we will combine both parties’ strengths to present another tremendously successful season with a more diverse set of perspectives this Fall.”

The Evening Sale will highlight two exquisite paintings by the greatest names in modern Chinese art – Sanyu and Wu Guanzhong. Painted in the 1930s, Paysage Aux Hirondelles is the only known work depicting a ‘street scene’ from Sanyu’s creative career. It represents a portrayal of his personal life in Paris, which infused the artist’s Eastern ideas and sensibilities into his adoption of Western artistic elements when he sojourned in France. The basic palette of Paysage Aux Hirondelles was composed of ‘five shades of ink’ from the traditional Chinese painting techniques, as well as the dreamy pastel colours of pink and white. Sanyu’s choice of pink for this street scene was his signature style at that time, which injected the romantic elements of Paris into the work. As for the composition of the sparrow and the building, the artist uses the artistic technique of traditional Chinese painting to create an ethereal and far-reaching atmosphere. Paysage Aux Hirondelles is thus one of Sanyu’s most distinctive landscapes, reflecting the artist’s worldview and approach to life - which is both vast and subtle.

Guilin was created by Wu Guanzhong in 1991, after the artist’s pursuit of modernisation of Chinese ink landscapes in the 1970s and returned to ink painting with the use of the quintessential artistic elements of dots, lines, and planes in the 1980s. The work is an epitome of Wu’s lifelong commitment to nationalisation of oil painting, presenting a unique aesthetic beauty which looks photorealistic from a distance and almost abstract when one moves closer to the canvas. In the 1990s, Wu Guanzhong rose to fame internationally and his creation moved towards a more expansive and freer visual field. As Wu put it, he was, in the 1990s, "advancing on both land and sea"—by "land" he meant oil pigments, and water-based inks were the "sea". Guilin, presented in this season’s Evening Sale, is an iconic piece from this period which distinct from the artist’s Guilin-themed paintings created in the 1970s based on sketches.

The Evening sale is further highlighted by Repetition, a museum-quality piece by Yayoi Kusama which will be appearing on the market for the first time. The work features 120 wooden boxes with Kusama’s iconic ‘soft sculpture’ protrusions, and each box is individually signed and contains uniquely crafted components. The artist’s soft-sculpture box works are exceptionally rare to the market, as most of them are now housed in the permanent collections of prestigious museums in Japan. Repetition is simultaneously monumental and intimate in scale, as the boxes can be split, as each box differs slightly, each can be considered unique. The title is alluded to when one imagines the repetitive process of creating such a richly detailed work, but also the importance of the theme of ‘repetition’ in the artist’s practice, as she uses it to confront her feats of obliteration in infinity.

Also highlighting the sale is Cinga Samson's Ivory V, which is the final canvas of his five-part Ivory series and the first work by the artist to be offered at auction in Asia. There is a haunting beauty in Ivory V, evoked not only by the ethereal figure at the forefront of the composition whose radiant, pupil-less eyes appear rolled back in reverie, but also in the Samson’s ability to confront the viewer's gaze whilst giving very little away of the emotions underpinning his subject's confident, stylised stance. Cinga Samson has recently established himself as an important new voice in contemporary painting. His current auction record was achieved at Phillips New York in June, when Two piece 1 far surpassed its pre-sale estimate and sold for an impressive US$378,000.

Ahead of the sales taking place in Hong Kong, touring exhibitions will be held in top tier cities across Asia including Taipei, Taichung, Shenzhen, Beijing, and Shanghai. The sale dates and other details for the hybrid auctions will be announced in due course.