Reaffirming the Continued Strength of

With a Market-Leading Overall Sell-Through Rate of 96%

Draws Enthusiasm from Collectors Around the Globe

NEW YORK – 9 JANUARY 2020 – Phillips in Association with Bacs & Russo is pleased to announce a grand total of $111 million for annual watch auctions in 2019, the highest live auction total for any house this year. Across the sales in Geneva, Hong Kong and New York, Phillips saw 12 exceptional timepieces soar above the $1 million mark, with the Urwerk Atomic Mechanical Control claiming the top price of the year, selling for $2.9 million and setting a new world record price for a watch made by an independent Swiss watchmaker sold at auction. Auction records were also broken for timepieces by Rolex, Patek Philippe, Vacheron Constantin, F.P.Journe, and George Daniels, among others. Success extended beyond the auction room this season into exhibitions, digital initiatives, a first-of-its-kind collaboration with Zenith, and the launch of Phillips Perpetual.

Aurel Bacs and Livia Russo, Senior Consultants for Phillips in Association with Bacs & Russo, said, “2019 was an extraordinary year for Phillips’ Watch department and we are both proud of our entire international team, as they continue to set the bar higher season after season.  From inspiring the ways in which watch enthusiasts are able to grow their collections to championing independent watchmakers, we continue to strive to be innovators while remaining committed to offering highest quality timepieces and outstanding client service within the ever-evolving landscape of the watch collecting. With all of the advancements and growth we have achieved in 2019, we have even more in store for 2020 and look forward to an exciting year ahead.” 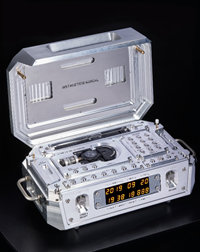 Phillips’ watch auctions soared to new heights in 2019, with an unmatched overall sell-through rate of 96%, including two “White Glove” sales – one in New York and one in Hong Kong. Phillips in Association with Bacs & Russo achieved an annual total of HK$330 million for watch sales in Asia, an impressive 40% increase from the previous year, and established its market leadership position in the region.  The Hong Kong Watch Auction: NINE saw a sale total up 33% from the previous year, welcoming a record number of close to 900 online bidders, and GAME CHANGERS, the December sale in New York, saw a total increase of 75% from December 2018. With five timepieces selling above $1 million for the first time ever in a NY watch auction, among the numerous auction records set were those for a Patek Philippe Reference 1518 in pink gold and a second series Patek Philippe Reference 2499 in yellow gold. Records were also set for a Rolex Day-Date, with the sale of Jack Nicklaus’ Reference 1803 for $1.22 million, and for a Rolex GMT-Master with Marlon Brando’s iconic Reference 1675 realizing 1.952 million. It was Phillips’ honor to offer these timepieces, with proceeds from both benefitting charitable organizations.  A testament to Phillips’ commitment to championing independent watchmaking brands, the December auction also set a new record for a timepiece by Urwerk, as the Atomic Mechanical Control and paired wristwatch soared to $2.9 million.  Earlier in the year, the Geneva Watch Auction: NINE also achieved a remarkable price of CHF 2,420,000/$2,391,444 for a magnificent and historically important pocket watch by George Daniels, considered by many as the father of independent watchmaking. 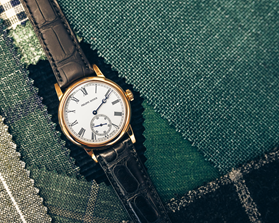 In addition to Phillips’ watch auctions, the company was proud to launch Perpetual, a first of its kind platform that combines private selling exhibitions, innovative partnerships, and a boutique experience in custom-built surroundings. This new destination offers exceptional watches for immediate purchase and is based at Phillips’ European headquarters on Berkeley Square. Since its inaugural opening in September, the concept has cemented Phillips’ reputation for the ability to source rare and important watches from established and independent brands, including Roger Smith, F. P. Journe, Laurent Ferrier, and Philippe Dufour.

Among the successful initiatives of Perpetual were Swatch, The All It Takes Is The Will To Do It Exhibition, which offered 200 unworn vintage Swatch watches with original box and guarantees, and Well Suited, a selling exhibition that combined the world’s finest independent watchmakers with a showcase of tailoring excellence from British luxury menswear brand Thom Sweeney. 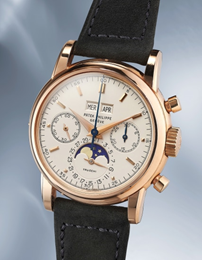 Among Phillips’ top priorities is the investment in digital advancements, as collectors are more comfortable than ever before in engaging with our online platforms. In 2019, global online registrants were up 80% from the previous year and hailed from 75 countries, the most of any department at Phillips, underscoring the truly international pool of collectors.  Also of note is the total number of lots sold to online bidders, which was up 50% from 2018.  The highest winning bid in a Phillips’ Watch auction was set this November in Double Signed: A Celebration of The Finest Partnerships Between Manufacturers and Retailers, with the sale of the Patek Philippe Reference 2499 at CHF 1,580,000, which was a record for any Phillips auction at the time of the sale.

In 2019, Phillips hosted a selection of non-selling exhibitions, beginning with Independent’s Day in Geneva in May, which was inspired by the work of George Daniels offered a unique occasion to view masterworks by thirteen independent watchmakers gathered in one place. This exhibition marked the first time that these watchmakers were united under one roof, displaying some of the most impressive masterworks of the 20th and the 21th centuries, including Philippe Dufour’s tryptic: Simplicity, Duality and Grande Sonnerie; unique timepieces by F.P.Journe; exclusive prototypes by Charles Frodsham, and the incredible worldtime wristwatch prototype by Louis Cottier. Beginning in November, Phillips was also pleased to host Jean-Claude Biver: A Retrospective. Share, Respect, Forgive, a traveling exhibition exclusively dedicated to the private collection of the visionary and tastemaker who helped build, influence and cement the destiny of watch brands such as Blancpain, Omega, Hublot and more recently Tag Heuer and Zenith. 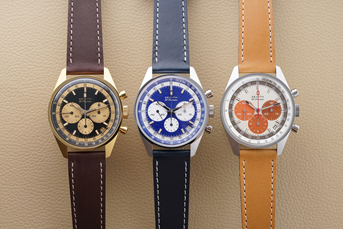 This year, Aurel Bacs, Senior Consultant at Bacs & Russo and Alex Ghotbi, Head of Watches Continental Europe & Middle East had the unique privilege of designing three Zenith El Primero Ref. A386 chronographs to honor the birth year of the El Primero caliber.  The collaboration led to what is known as the “One-Off,” the only Ref. A386 that Zenith will ever make in PT 950 platinum, and is the first-of-its-kind to feature a breathtaking Lapis Lazuli dial. The unique Zenith El Primero sold for $250,000 (a world record for an El Primero) during The Geneva Watch Auction X, with proceeds from the sale donated to the ZOE4LIFE foundation, and 69 pieces were created in the model of the other two original designs.

ABOUT PHILLIPS IN ASSOCIATION WITH BACS & RUSSO
The team of specialists at Phillips Watches is dedicated to an uncompromised approach to quality, transparency, and client service, achieving a sale total of $111 million in 2019.

Phillips is a leading global platform for buying and selling 20th and 21st century art and design. With dedicated expertise in the areas of 20th Century and Contemporary Art, Design, Photographs, Editions, Watches, and Jewelry, Phillips offers professional services and advice on all aspects of collecting. Auctions and exhibitions are held at salerooms in New York, London, Geneva, and Hong Kong, while clients are further served through representative offices based throughout Europe, the United States and Asia. Phillips also offers an online auction platform accessible anywhere in the world.  In addition to providing selling and buying opportunities through auction, Phillips brokers private sales and offers assistance with appraisals, valuations, and other financial services. Visit www.phillips.com for further information.