To be Offered During RACING PULSE, the Annual Flagship New York Watch Auction, on 12 December 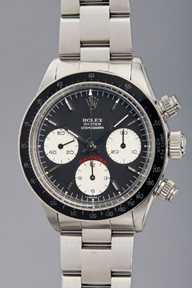 Estimate: In Excess of $1 million 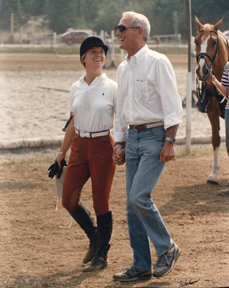 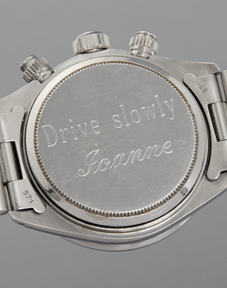 NEW YORK – 29 OCTOBER 2020 – On Saturday, 12 December, Phillips in Association with Bacs & Russo, will offer one of the world’s most important Rolex watches – Paul Newman’s “Big Red” Rolex Cosmograph Daytona – in RACING PULSE, the Flagship New York watch auction. Estimated in excess of $1 million, it is the wristwatch Paul Newman was most often photographed wearing for over two decades until he gifted it to his daughter, Clea Newman Soderlund, in 2008. Treasured by Clea for a dozen years, it remains remarkably well-preserved, with its engraved caseback displaying the incredible and loving inscription, “Drive slowly Joanne.” Bearing all the features of one of the most sought-after wristwatches of the present era, it is being offered with its original dial with its bold black dial with white sub-dials, featuring the distinctive “Big Red” Daytona logo at 6 o’clock.

Paul Boutros, Phillips’ Head of Watches, Americas, said, “While many know Joanne Woodward and Paul Newman as actors and philanthropists, their names signal something more to watch collectors – an extraordinary impact on the field of watch collecting. Throughout his lifetime, Paul Newman was photographed wearing a small handful of Rolex Cosmograph Daytona watches. Without any doubt, it is this association with Paul Newman that has led to the Rolex Daytona being universally regarded as possibly the world’s most sought after wristwatch. Of these, the watch he owned and wore the longest is the present “Big Red” Daytona Ref. 6263. It is amongst the most exclusive handful of watches with impeccable Newman-family provenance. We are truly humbled that the Newman family once again turned to Phillips for this incredibly important consignment, and we sincerely thank them for their trust. With the support of Clea’s sisters and with a portion of proceeds benefiting charitable organizations founded by Paul Newman, we are thrilled and honored to offer what is one of the most storied vintage Rolex watches of our era.” 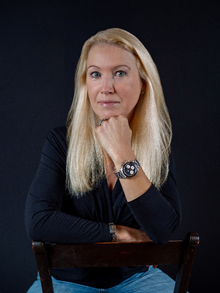 According to Clea, Newman’s “Big Red” Daytona was presented to him by his wife Joanne Woodward in 1983 for their 25th wedding anniversary. Nearly two decades earlier, in 1965, Newman was injured in a serious motorcycle accident. A few years later, during filming of the 1969 film, Winning, his passion for car racing would form. With those unpleasant memories ever fresh in her mind, Joanne felt great discomfort every time he went onto the racetrack for a drive. Always concerned for the safety of her husband whenever he left to pursue his passion on the track, she wanted to make sure that he continued to remember to take care of himself, choosing the loving message for this caseback.

“He wore the watch nearly every day until he gave it to me. He was photographed wearing it on numerous occasions as was I. It has been a treasure of mine for almost thirteen years. To me, this watch shows my mother’s tolerance of his continued passion for racing and reflects the enduring love between them which remained for another 25 years until his passing.” 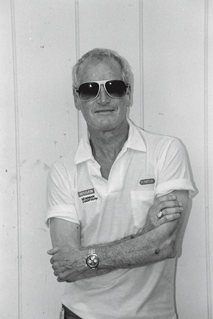 Throughout his lifetime, Mr. Newman was seen wearing several generations of Daytona models. He not only made the model famous, but also, without any doubt, helped fuel the growth and popularity of wristwatch collecting beginning in the 1980s. The present Rolex was not the first Paul Newman was famous for wearing. A woman of exceptional taste, Joanne Woodward gifted him his first Rolex Daytona in 1968, a reference 6239, which was engraved “Drive Carefully Me.” The watch that first sparked the famous association between Newman and Rolex, in approximately 1984, it seemingly disappeared once he received a new watch – the one being sold this December. The story of Paul Newman’s Ref. 6239 is well-known now: Newman gifted it to his daughter Nell’s boyfriend at the time, James Cox, who owned it for over thirty years until he consigned it to Phillips. It made history in the Winning Icons New York auction of October 2017, achieving a world record price of $17.8 million. It was after Newman received the “Big Red” Ref. 6263 from his wife, the watch being sold in December, that he made the decision to gift the ref. 6239.

Newman was often photographed wearing the “Big Red” with its chronograph pushers unscrewed, so that he would have easy access to begin timing events –  whether during a race or simply in his day-to-day activities, including timing his daughter Clea’s horseback riding at their home in Westport, Connecticut. So proud and confident he was of the accuracy of his Daytonas, he would place bets with friends that his watch was more accurate than theirs. After calling Central Time, a phone service providing exact time, Newman would collect his winnings. A true enthusiast, he wore this very watch on a bund strap similar to his Ref. 6239 with exotic dial, on a President bracelet, Jubilee bracelet, and the presently fitted Oyster bracelet. The effortlessness and unpretentiousness of his personal style and aura carried over in his approach to watches. Rolex’s Cosmograph Daytona was meant to be a utilitarian timekeeper, to provide timing information legibly and accurately - suiting Paul Newman’s lifestyle and sensibilities perfectly.

Introduced in 1969, the Daytona reference 6263 housed Rolex’s caliber 727 and featured screw down pushers to prevent their actuation underwater. Along with the Ref. 6265, the stainless steel bezel version of the watch, the two references sit proudly in the pantheon of Rolex chronograph history, and were offered with either a silvered dial or black dial, similar to the present watch. It is sized at a generous 37mm diameter without the pushers, with the gently curved lugs providing comfort for any sized wrist. 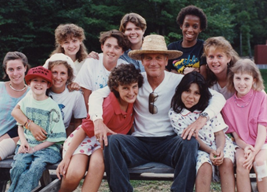 The Daytona is a model that will forever be associated with Paul Newman, treasured by watch collectors simply because Newman embodied an unstudied, unassuming coolness while wearing his Daytona that is not so easily captured. The popularity of the model among collectors in the twenty-first century has only increased – no doubt in part due its enduring association with Paul Newman. Phillips is thrilled and honored to offer this incredible “two-owner” timepiece, direct from Paul Newman’s daughter Clea, with a portion of the proceeds going to charitable causes that were important to Paul Newman and Joanne Woodward, including SeriousFun Children’s Network and Safe Water Network, charities founded by Paul Newman himself.

This Ref. 6263 was Newman’s faithful companion for over two decades as he grew his philanthropic efforts and food business, delivered Oscar©-winning performances on the silver screen, cherished his family, and continued to compete in motorsport events. Its superb provenance, famous Drive Slowly Joanne engraving by Joanne Woodward, and outstanding overall condition make this “Paul Newman” “Big Red” Daytona one of the world’s most important Rolex watches, and a once-in-a-lifetime opportunity.