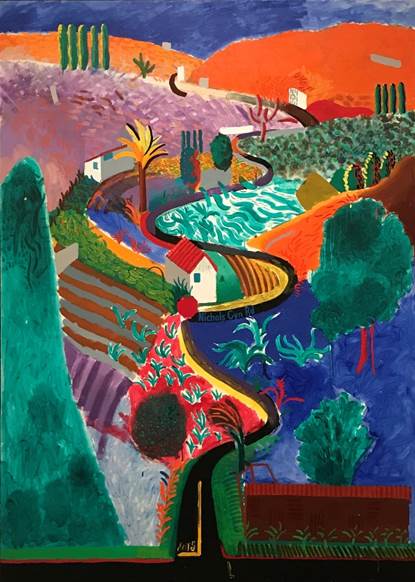 Estimate: In the Region of $35 Million

NEW YORK – 26 OCTOBER 2020 – Phillips is pleased to announce David Hockney’s Nichols Canyon, executed in 1980, as the star lot of New York’s 20th Century and Contemporary Art Evening Sale, slated for 7 December. With an estimate in the region of $35 million, Nichols Canyon is one of Hockney’s greatest masterpieces—and unequivocally the most important landscape by the artist in private hands. Marking the beginning of his decades-long panoramic landscapes series, it was one of only two monumental works Hockney executed following his return to painting from a brief hiatus spent exploring photography in the 1970s; the other, Mulholland Drive: The Road to the Studio, is held in the permanent collection of the Los Angeles County Museum of Art. As one of the greatest modern depictions of the Los Angeles environment, Nichols Canyon has been included as his first mature landscape in the most important exhibitions of his career—such as the landmark group show A New Spirit in Painting at the Royal Academy in London in 1981, one of the most significant exhibits of the 20th century, as well as both his major traveling retrospectives in 1988-1989 and 2017-2018. Nichols Canyon will be on view at Phillips in London from 26 October – 1 November, Hong Kong from 10-12 November, followed by a viewing in New York ahead of the sale.

Jean-Paul Engelen, Phillips’ Deputy Chairman and Co-Head of 20th Century and Contemporary Art states, “Nichols Canyon is, without question, the most significant landscape by Hockney to ever appear at auction. The work, whose companion painting was quickly acquired by LACMA after its creation, has remained in the same collection for nearly four decades. Nichols Canyon also marks the first time a landscape painting by Hockney is valued at more than $30 million, rivaling the price of his figurative works. The fact that this extraordinary painting is coming to auction now, for the first time, underscores the continued strength and resilience of the masterpiece market.”

In the fall of 1980, David Hockney returned from New York to Los Angeles, approaching landscape painting anew with inspiration from the city’s mixed urban and natural environs. Every day while passing Nichols Canyon on his drive to his studio, he was awestruck by the wild, winding setting that surrounded him. “The moment you live up here, you get a different view of Los Angeles. First of all these wiggly lines seem to enter your life, and they entered the paintings,” Hockney expressed. “I began Nichols Canyon. I took a large canvas and drew a wiggly line down the middle which is what the roads seem to be. I was living up the hills and painting in my studio down the hills, so I was traveling back and forth every day, often two, three, four times a day. I actually felt those wiggly lines.”

After completing Nichols Canyon in 1980, Hockney was quite fond of the painting and chose to keep it for himself, instead of selling. Shortly thereafter, however, he fell in love with a small work by Pablo Picasso at Claude Bernard’s Gallery in Paris. He was hesitant to spend the $135,000 for the painting, but André Emmerich Gallery heard about the problem and made a deal with him – they bought the Picasso for Hockney and in return, he gave them two of his paintings, The Conversation and Nichols Canyon. Having remained in the same private collection since January of 1982, when it was purchased from Emmerich Gallery, Nichols Canyon comes to auction with impeccable provenance.

From his swimming pools of 1960s to the California landscape of the 1980s, the L.A. lifestyle and landscape is one of the Hockney’s most iconic subjects, and Nichols Canyon marked the beginning of his renowned body of richly-painted panoramas of the city most dear to him. In these works, Hockney deftly explores the two-dimensional depiction of movement and the passing of time though a nearly cinematic iteration of memory and repetition.

Reminiscent of the bold palette and expressive, painterly approach of the Fauvists, such as Henri Matisse and André Derain, Nichols Canyon is emblematic of Hockney’s astute ability to place the past and present in dialogue, reimagining and reinventing modernism for the contemporary era.