To Feature the Brand-Defining Panerai Luminor worn in the film, Daylight and

One of the most complicated Richard Mille Watches Ever Made, inspired by Stallone’s Iconic Movie Character, John Rambo

Amongst Other Important Richard Mille Timepieces from the Golden Globe®-Winning Actor, Writer, and Director’s Esteemed Collection

NEW YORK – 10 NOVEMBER 2020 – Phillips in Association with Bacs and Russo is delighted to announce the sale of five wristwatches from the collection of multiple Academy Award®-Nominated and Golden Globe-Winning actor, Sylvester Stallone. The collection will be auctioned during the thematic New York Watches auction, “Racing Pulse”, on Saturday, 12 December, including the Panerai Luminor worn for Mr. Stallone’s role in Daylight that can be considered the most important modern Panerai wristwatch ever offered publicly. Four exceptional Richard Mille watches will also be offered, including one inspired by Mr. Stallone, and one worn by him in the film The Expendables 3.

Paul Boutros, Head of Watches, Americas, said, “Sylvester Stallone has been a household name for decades due to his iconic roles in films that have skyrocketed to the status of cultural phenomena. Most people, however, may not know that, in addition to his world-renowned talents as an actor, writer and director, he is also a long-time watch collector. Acquiring pieces with a keen eye, he recognizes the watchmaking excellence of Richard Mille, and is widely recognized for having singlehandedly launched the popularity of Panerai around the world with this very Panerai Luminor watch we are offering. Over several decades, he has assembled a truly remarkable collection by some of the most important watchmakers of our day. It is our honor to work with Mr. Stallone in offering these five watches to our clients who will recognize the importance of these timepieces.”

Phillips is thrilled to offer what is, without a doubt, the most important modern wristwatch ever produced by Panerai. It is the exact watch worn by Sylvester Stallone throughout the 1996 film Daylight and is widely considered as a “genesis” watch that would launch the modern Panerai brand and consequently shaping the Swiss watchmaking industry. Since its founding in 1860 by Giovanni Panerai as a small workshop, the firm Officine Panerai has been known for precision instruments, becoming the supplier of wristwatches to the Italian Royal Navy. In 1993, Panerai launched a collection of limited-edition watches inspired by historical models from the company’s past intended for the civilian market.  Through that endeavor, 677 pieces of the Luminor Panerai 5218-201/a, also known as the “Pre-Vendome Logo,” were produced. Consumer response was quite limited, as the company’s public profile was largely unknown, but the turning point came in 1996, when that now iconic reference appeared on the wrist of Sylvester Stallone throughout the film, Daylight.  Mr. Stallone’s instant love for the brand shined a bright spotlight on the unique design of the Luminor Panerai, and within a very short time, Officine Panerai went from relative anonymity to achieving enormous international exposure and recognition.

This PAM5218-201/a is remarkably well preserved, and fitted on its rare, original sharkskin strap with original Panerai Pre-Vendome buckle, also seen in the film. Stallone loved the watch and never removed it during the entire duration of filming. He would later state it “went through hell in every scene,” and has remained in his possession until today. The Panerai 5218-201/a is being offered exactly as it was worn by Mr. Stallone, along with its original box, two additional Panerai Pre-Vendome straps with buckles, and its original brass screwdriver.  In addition to a handwritten and signed note by Mr. Stallone, the watch will also be accompanied by an original 1996 studio-issued lobby card from Daylight, also signed by Mr. Stallone, with specific reference by him to this exact watch.

Born of a conversation between Sylvester Stallone and Richard Mille, the RM025-01 seeks to answer the question “what watch would John Rambo wear?”, referencing the iconic film starring Mr. Stallone from 1982, which became a series of five blockbuster movies spanning four decades. John Rambo is a cultural icon, and most action heroes and films have since drawn some inspiration from the character Mr. Stallone originated. Mr. Stallone and Mr. Mille’s discussion led to the creation of one of the most impressive and complicated Richard Mille timepieces ever manufactured since the brand’s inception. With a dizzying array of technical features, the Adventure Tourbillon Chronograph is optimized to aid in survival. Designed to be an indispensable survival tool, the RM25-01 features a tourbillon for accuracy, a chronograph for tracking elapsed time, a compass with a removable bezel and carbon cover, a level to promote accuracy while using the compass, and a tiny compartment above the crown to hold emergency water purification tablets. One of a limited edition of just 20 watches made, this RM025-01 is also offered with a letter personally handwritten and signed by Mr. Stallone on his private stationery.

Richard Mille launched his first watch, the RM001 Tourbillon, in 2000. Mille sought to create wristwatches that were 21st century masterpieces, employing cutting edge materials and techniques, but remaining steeped in traditional Swiss watchmaking. Released in 2013, the RM052-01, which leads the group of watches being offered from Mr. Stallone’s collection, has an innovative case composed of TZP ceramic and carbon nanotubes. Its most impressive feature however is its skeletonized movement, featuring a prominent pink gold skull at its center and tourbillon-equipped escapement. A modern “memento mori,” imagery of the skull has for centuries been used in art and watches as a reminder of one’s mortality, and the inevitability of death. The signature case and bezel are made from TZP, a low-density material that is highly scratch resistant. Mr. Stallone has frequently been photographed wearing this exact watch, one of an exclusive limited edition of just 30 examples. It is preserved in superb condition and will be offered together with a letter personally handwritten and signed by Mr. Stallone on his private stationery describing the watch. With its superb provenance, outstanding state of preservation, and exceptional quality, the present lot is a rare opportunity to own a very special, limited edition, Richard Mille “Skull” wristwatch. 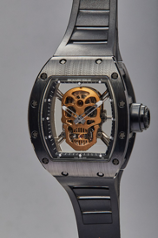 Richard Mille’s movements are manufactured to be worn in extreme conditions using revolutionary materials. A testament to this, Mille often partners with brand ambassadors from the sports world who with their own excellence, represent the premier quality of Richard Mille’s watches. The RM059-01, produced in a limited edition of just 50 examples, is one of the most iconic watches ever made by Richard Mille and was designed to be worn during 100-meter competitive sprinting. The watch is extremely lightweight and was created for Olympian Yohan Blake, the second fastest man in history and one of the leading athletes of the 21st century. Blake was the youngest 100-meter world champion, an achievement he won at the age of 21 in 2011. The bridges spanning the movement are designed to evoke the claws of “The Beast,” Yohan Blake's nickname, and embodies the colors of his Jamaican homeland. Housed in an asymmetric case, the movement’s dynamic bridges are made from anticorodal aluminum and support the tourbillon cage, strengthened by a grade 5 titanium baseplate.  The RM059-01 will also be offered with a letter personally handwritten and signed by Mr. Stallone on his private stationery, certifying its superb provenance. 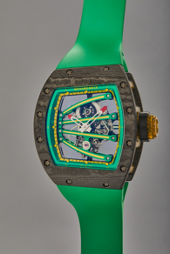 Combining a chronograph with an annual calendar function, rotatable bezel, and waterproof case, the RM032 flouts the traditional design and layout of the diver’s wristwatch. The watch meets all the requirements of the ISO 6452 standard for diving watches, most notably magnetic, chemical, and shock resistance, as well as adequate legibility at 25 centimeters in total darkness, The titanium case is designed to endure the abuse of an active lifestyle, including a locking mechanism for the crown and a tripartite case. At 50mm diameter and 18mm in height, it has a commanding presence. Sylvester Stallone wore this exact watch during filming of The Expendables 3 (2014), in which he played the role of the rugged and gritty Barney Ross, a highly-skilled mercenary. it is clearly visible in the film, as well as in the official trailer and official press photographs. The watch is accompanied by a handwritten note from Stallone and an additional Richard Mille strap. Phillips is pleased to offer this exceptional watch that will certainly impress any collector or enthusiast of sports watches.